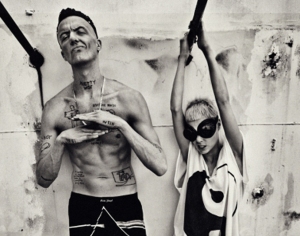 This is going to be one of my weirdest band plugs mainly because I don’t even know if I like Die Antwoord, but when I started watching their bizarre music videos over Christmas I wasn’t able to shake them from my mind and since then all I’ve wanted to do is find out more about these freaks. Die Antwoord consists of South African duo Ninja and Yo-Landi Visser and although not ever really considered a full member their DJ, DJ Hi-Tek. They define themselves as a rap-rave group and have pretty much coined the term Zef to describe their music.

Now the majority of you will know Die Antwoord for ‘Enter the Ninja’ their youtube hit that has now reached over 14 million views. Enter the Ninja is a decent indicator as to what this band are, they have a constant question mark over their heads asking are these guys for real or is this just a big piss-take? Looking at their other songs the answer will become no clearer to you. You will frequently come across something similar to Enter the Ninja; Fatty Boom Boom, for example features the same kind of simple hook that sounds like it was written by a three year old but is it ripping on current pop culture or not? Their are other songs that are much more enjoyable listens, my favourite is Fok Julie Naaiers which I think is slightly more normal sounding, but I use the word normal very loosely in this instance. Their first album $o$ is of course strange but their follow up record Ten$ion I found a much more enjoyable listen but it’s impossible to deny the production qualities on both. The track Baby’s on Fire for example wouldn’t sound out of place in a UK night club but is immediately better than any of the dance music around in the country today simply for the value of their weirdness.

On the question of whether these nutters are being serious or not I’m almost they’re playing caricatures. Watching various interviews with the duo on YouTube though doesn’t really answer anything one interview in particular involves Ninja losing it at the interviewer for asking if the band viewed themselves as conceptual art. But I think the interviews these guys take part in they are playing their parts during them. One of the reasons I believe it’s all a joke is from listening to previous projects of theirs. Ninja’s real name is Watkin Tudor Jones and Die Antwoord is not his first project with Yo-Landi. Their most notable project beforehand was probably Max Normal who were a much more straight hip-hop and when you listen to their tracks showing that the pair do know what normal music is. Another band of theirs was The Constructus Corporation which was more trip-hoppy but still infinitely more normal than Die Antwoord.

The biggest thing swaying me though is the bands videos. They are some of the most entertaining things I have ever seen. The aforementioned Fatty Boom Boom features a Lady Gaga lookalike giving birth to a prawn. All their official videos are incredibly well-crafted pieces of abstract film. The greatest thing the band have done is without their short film Umshini Wam which I will post at the bottom of this entry. Their videos are so good in fact that even David Lynch is a fan of the band allegedly he has invited them to his house for a coffee so maybe if we all keep our fingers crossed one day we might a feature length Lynch/Antwoord movie, I’m foaming at the mouth just thinking about it enjoy this fucked up shit: