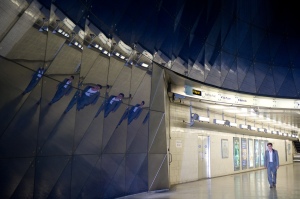 Now Danny Boyle is probably the biggest British director around after the success of Slumdog Millionaire and the small matter of the Olympic opening ceremony. It may seem strange then that his latest film, Trance, is a relatively low-budget affair costing a mere £13 million showing that no one can predict what the Academy-award winning director is going to do next. Trance is another new territory in terms of theme for Boyle as well, having already covered drug culture, sci-fi, zombies, romance and a man chopping off his own arm with Trance he goes right inside the mind with a twisting, turning plot of hypnosis and amnesia. The film is about Simon (James McAvoy), an art auctioneer, who is in charge of getting paintings to safety in the event of a robbery, when this happens however he bares the brunt of a blow to the head and when he comes to it turns it he was in on the whole thing but has completely forgotten what he’s done with it. With  criminal, Franck (Vincent Cassell) and his gang breathing down his neck to remember the group decide they’re going to have to try something drastic in order to trigger Simon’s memory. They choose Elizabeth (Rosario Dawson), a psychiatrist, to hypnotise him in the hope she might somehow get the information out of him but end up getting a lot more than they all bargained for, the further we go on the more we find out that what we know about the events are not at all what they first seemed.

The film is incredibly plot-heavy and every ten minutes something new is revealed that gives everything a new meaning, at times it gets a bit much and there are various points where I was getting annoyed at the fact that we kept seeing the same things over and over but each time we’re told that the way we’d seen it before was wrong begging the question of why we needed to see it in the first place. On the other hand though the tension is built superbly throughout so when you begin to actually find out some genuine information about what went on it feels incredibly rewarding, when everything comes to a head in the films finale Boyle’s experience shines through and it results in a tense and action-packed few scenes that really get your pulse raging. It’s a shame then that overall the plot is over-heavy with twists and by the time it actually ends it all feels over explained when things could easily have been rounded off slightly earlier and the film would have been better for it. Trance has everything else going for it but unfortunately it lets itself down.

It’s not a complete failure, I was entertained the whole way through and there were moments were it was exceptional. Cassell’s performance was a stand-out and there are visual flourishes that look so good you’d be hard done by to look past them because of the over-exuberant story. It’s unfortunate that Trance does not quite stand up against its directors body of work but it’s not his biggest misfire by any stretch and it still manages to showcase his unique film-making talent that seems to lend itself to any kind of film you could imagine.