I am actually for once very pleased with how my combined title has worked out this week, it is definitely one of my better ones! And the quality of the title has coincided with the fact that I am actually managing to put out a weekly update on time, even if my posts this week did end up happening over the last three days, but nevertheless I have uploaded more of my genius writings for you to cast your eyes upon in awe. First of all as you may have guessed was my review of the first ever Studio Ghibli film, My Neighbour Totoro. Then there was a review of Heavy Rain, the game that took over my life for the past week. And finally there was band plug of metal band Protest the Hero.

On that note I will leave you with a sample of Protest the Hero, here is the hilarious video to Hair-Trigger which I mentioned in the plug, enjoy 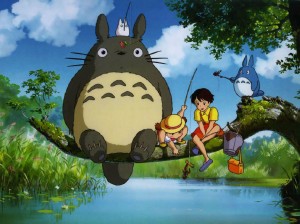 If you’ve been a reader of my blog for a while you may have come across my old review of Ponyo, this was back when I was only really a beginner when it came to Studio Ghibli. Since then my knowledge has grown somewhat and I only have a few more of Miyazaki’s films left to watch. My Neighbour Totoro is the original Ghibli movie and having now watched the film twice I can fully confirm that it is my favourite so far.

My Neighbour Totoro is the story of a small family, two little girls and their father (their mother is sick in hospital) who move into a new house that is supposedly haunted by soot gremlins. One day when Kanta, the older of the sisters, is at school Mei finds a magical creature which she names Totoro. As the film goes on Totoro pops up and helps the girls when they need it most. The strangest thing about this film is that there actually seems to be no conflicts at all. Every character is good and happy and trying to make the best for each other. This is what Miyazaki does so well and so uniquely. The magic of the characters and the wackiness of his inventions are enough to make the film entertaining enough without there needing any baddies or fights. Totoro is the prime example of this, when it comes to magical creatures he is the most lovable and when it comes to wackiness his flying, multi-legged, invisible cat bus is enough to make anyone smile with sheer glee.

It is this trait that sets Ghibli apart from any other childrens studio on the planet. Disney can’t do an animation without an evil baddie, not even Pixar can muster something quite so whimsical as to bypass any need for some kind of conflict. But Miyazaki can pull it off. The result are a collection of films that can genuinely brighten up your day, put a smile on your face and make you happy about life whether you’re four years old or forty.