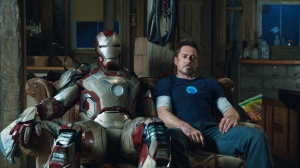 The first big blockbuster of the summer arrives in the form of Iron Man 3. Fresh off the back of Avengers Assemble Marvel had quite a challenge following on from their biggest success ever. It was an obvious decision for them to follow up their big team-up with their strongest solo franchise, Iron Man. The first Iron Man movie was a great introduction to the character and one of the better superhero origin films of the last decade or so. It’s sequel, however, didn’t quite reach the same enjoyment, it had a muddled plot and the final battle was extremely anti-climactic. There was every reason to believe that the third instalment would bring things back on track for Stark Industries. It’s the first in the franchise without Jon Favreau directing, instead it’s the turn of Shane Black, it was said that Iron Man 3 would be a much more personal adventure for our hero to contrast with the Avengers and as with all sequels, expect it to be darker than its predecessors.

Iron Man 3 is a very personal adventure for Tony Stark, he spends a large part of the movie without his iron suit and is left to save himself without his gadgetry. It’s an attempt to strip things down and give Downey Jr’s billionaire superhero a chance to make us feel for him again. Unfortunately, it’s only partly successful. While the movie is a good few steps above Iron Man 2 it still lacks the spark that can be fond in the first one. The action is well handled and fun to watch, as are the jokes – Ben Kingsley’s Mandarin is especially funny – but the overall feeling from the movie is one of mediocrity. One that’s happy to skate by without trying too hard. It works, just about, but is ultimately a disappointment and something that Marvel Studios can’t afford to be doing if they want to keep the momentum going. There’s plenty to be enjoyed here but, ultimately, this feels more mass produced than most superhero movies and ends up having less heart than it should do.

While Iron Man 3 is an enjoyable watch, I think, if the franchise carries on in this vain it won’t have too much more time. The box office obviously disagrees with me at the moment but let’s hope that when a fourth instalment gets planned they do something really special.

Wu-Tang Clan’s Inspectah Deck joins forces with underground rappers 7L and Esoteric to create Czarface, probably the most refreshing hip-hop record in years. I stumbled across the album on iTunes and was taken aback by how special it actually was. They combine old school hip hop techniques with more recent styles and the result is a breath of fresh air for the whole of hip hop music, in my opinion.

The record is not littered with samples like a large amount of popular hip hop nowadays, it instead takes the somewhat old fashioned approach of bringing the actual rapping to the fore, the beats being laid underneath in such a way that no limelight is taken off the lyrics. The album has a running theme of superheroes with the likes of Batman, Iron Man, etc. popping up at various points and the trio have created this character the ‘Czarface’ based on these more well known creations, in doing this its given the guys a fresh way of delivering old school raps, where they reference the things that they love and make brash claims about being the greatest in the world. The art work, of course, ties in with this and I think it just looks fucking sick, giving the whole concept of the album a picture that we can all relate to and therefore engage with the record in a much better way. While the rapping is the stand out factor it would be wrong for me to completely discount how good the production is here too, I’m sure if these guys wanted they could’ve used the same beats more prominently and the tracks would still be excellent, making the decision to have them as a bottom layer to each song even more inspired since so much work have obviously gone into them. It is clear here that everyone involved is just out to create the music they were brought up on and bring it back the way it should be. Czarface is coming for you, let’s hope this isn’t the only thing we hear from him.