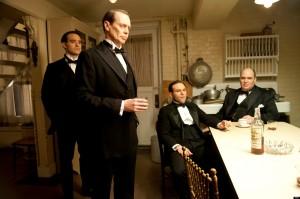 Boardwalk entered its fourth season off the back of a superb third series as one of the most consistently entertaining shows around at the moment. Things were going to be different this time round though with Nucky (Steve Buscemi) and Margaret Schroeder’s (Kelly Macdoanld) relationship a thing of the past and his tyrannical reign of the criminal underworld not as secure as it once was.

Nucky’s storyline is no longer the main attraction come this fourth series and the stand-out plot this time round comes with the arrival of Valentin Narcisse (Jeffrey Wright) causing Chalky White (Michael Kenneth Williams) numerous problems. Also Al Capone (Stephen Graham) continues his usual bully tactics this time becoming involved with Michael Shannon’s Nelson Van Alden character who seems a lot less crazy than he has in previous seasons. Season four saw the usual slow burn and tension building that we’ve come to expect of the show, with impending explosions constantly bubbling just below the surface ready to blow by the final few episodes and it doesn’t disappoint. In this series despite Nucky perhaps not being as central a character as he originally was his empire is under more threat than it has ever been and although the character will never show it it’s clear that soon things will come crumbling down around him. The strongest point as always with Boardwalk is its writing and that’s no different in season four but there is not a single element of the show that isn’t done superbly well.

It’s pleasing that a programme of this cost and intelligence can manage to keep going in a climate of television where studios want to make cheap, accessible shows but Boardwalk is one of a small flurry of shows marking a revolution that exemplifies how the format can be the best way to tell great stories. With Breaking Bad over it’s time Boardwalk deserves a place as the best running TV show on our screens and in my opinion, it is. 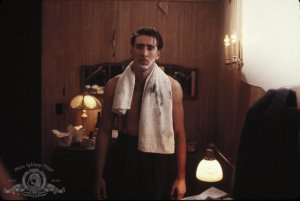 My latest stop on my Cage mission saw me stop by another Francis Ford Coppola movie with 1984’s The Cotton Club. It tells the story of he famous Harlem jazz club of the same name. Tying in with organised crime, politics and culture at a very interesting time in American history, all the while entertaining us with music and dancing.

The Cotton Club was one of the more enjoyable films I’ve watched so far for CAGE RAGE it’s well produced and has some great, tense scenes of action. However, ultimately I felt the film didn’t flow quite right. The story seemed disjointed and just as you though something good was about to happen you were shown another over-long scene of dancing that, although amazing, doesn’t progress the plot in any way and after you’ve seen a couple of these scenes they get a bit tedious and stop the film from flowing properly. Overall I found the film enjoyable but overly flawed and lacking in the bite that a number of similar films have. When it comes to Cage there wasn’t really enough of him for my liking, he did do some pretty cool stuff though he does go slightly crazy and he’s laying a mob member which you can’t really complain about.

There are a couple of good Cage bits, and some of his best scenes so far on my filmography tour but in the end there just wasn’t enough screen time to make The Cotton Club worthy of being the first 3/5 on the Rage scale. As a film it’s a worth a watch but don’t expect anything classic. 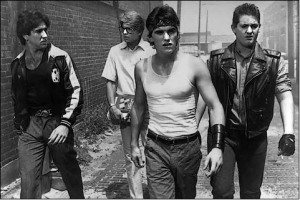 As CAGE RAGE continues the second step on my stairway to Cage heaven was Francis Ford Coppola’s Rumble Fish. A stylish black-and-white street gang movie. Cage only provides support here as the lead roles are taken by Matt Dillon and an unrecognisable, young Mickey Rourke. Dillon plays Rusty James a character who is misunderstood by both his older brother (The Motorcycle Boy, Rourke) and his father (Dennis Hopper). Rusty James lives constantly in the shadow of his elders, his brother is some kind of legend on the street, but whenever Rusty James tries to be like him it goes drastically wrong.

Shot entirely in black-and-white, until a few flashes of colour at the very end the best thing about this movie is how it looks. There are a number of outstanding fight scenes where some of the shots will get any movie fan excited. The story’s an intriguing one as well and while the main idea of the plot is fairly run-of-the-mill the way events pan out is clever and gives the movie an unexpected emotional kick. The performance from Dillon is strong and leaves you wondering why he’s only really gone on to star in mediocre cinema, he’s both believable and sympathetic as the insecure little brother and you really feel for him when he is belittled by his older brother. Rourke is something special here too. As for Cage, though, there really is not quite enough of him, when he is there he’s great and he is involved in the odd fight scene but once the film reaches its mid-point he is more-or-less out of the story altogether, which is greatly disappointing.

As a film I found Rumble Fish an enjoyable watch, not without its flaws but artistically filmed and very well acted creating an emotional and gripping story with an empowering end. For CAGE RAGE it, sadly, doesn’t give us quite what we’re wanting, a great shame. 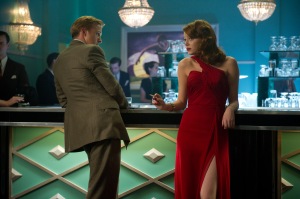 So last Friday was my birthday and as part of my celebrations I went to go and see Ruben Fliescher’s new movie, Gangster Squad. Boasting an all star cast that includes Ryan Gosling, Emma Stone, Josh Brolin and Sean Penn there was much to get excited about for this mob movie. It seems the critics didn’t get what they wanted but in my opinion they were looking for the wrong things.

The story line is very similar to The Untouchables something which probably didn’t work in the movies favour because it reminds the audience of one of the all-time greats. This is the films biggest problem, I think reviewers got the impression Gangster Squad was attempting to be the next Untouchables, they were expecting an epic crime opus on that kind of level. What they got was something completely different, and I think Fleischer has actually hit the nail on the head.

Everyone knows its near impossible to meet the quality of some the entries into the cops-chasing-mobster genre that Gangster Squad doesn’t even attempt to compete with them and in doing so comes out a much better movie than it would have had it tried be one of those movies. It is instead happy to give the audience some pure wish fulfilment. Character’s are hardly built upon at all, what we’re worried about here is guns, girls and clinical coolness, most of which is delivered to us on a silver platter by the effortlessly cool Ryan Gosling. It would be an injustice for me not to mention how much Emma Stone was a highlight particularly when in full-on Jessica Rabbit mode as pictured above. All the cast seem to have a ball here, all completely happy to be charicatures rather than fully fleshed characters. No matter what the critics say this movie is one of the most entertaining I’ve seen in a long while and it deserves more credit than it has got. 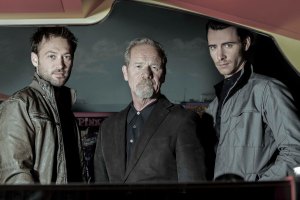 Channel 4’s four-part miniseries tells the story of Richie Beckett (Peter Mullan), a Brighton-based entrepeneur who has a history of organised crime, and his two sons  Matty (Harry Lloyd) and Cal (Paul Nicholls). The series begins as a fairly normal British crime story with our three protagonists getting themselves involved in some less than savoury goings on but it’s not really until episode two that the show gets its own unique identity. The difference being that Richie is diagnosed with Alzheimer’s causing him to lose control of his actions and memory, his reformed personality starts to merge with his ruthless past and his worsening memory means he doesn’t know some of the crazy stuff that he’s doing through it all.

The performance from Mullan is the shows greatest triumph as he masterfully portrays both sides of the character. On the one side he’s a violent, unpredictable mob boss who doesn’t mind getting his hands dirty and on the other he’s a poor, old man trying to do right by his family but can’t because of the state of his mind. It’s not really till the final episode that we see the character’s full sensitivity. Unfortunately his supporting cast are not quite of the same calibre, both Lloyd and Nicholls are often unconvincing and nearly always generic in their roles and are completely eclipsed by Mullan. I found I didn’t care about these two only their dad.

Overall it’s the shows inconsistency that means it doesn’t fill it’s potential. While the idea of this character falling further in dementia and the way it is dealt with is superb the other areas of the plot just don’t have enough about them to be memorable. All the criminal goings-on feel bland and un-inventive. What is an incredible premise for a programme is unfortunately not fully realised by it’s more generic plot areas. The ending as well seemed a bit of a let down. For The Fear there is as much to praised as there is criticised ultimately making it an entertaining watch but nothing much more than that. 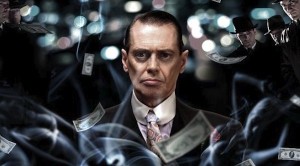 Following on from massive finale of season two this time we properly hit the ground running. The introduction of new villain Gyp Rossetti, played by Bobby Cannavale, gives even the first few episodes flourishes of brutal violence something that in the two previous seasons took a lot longer in between outbursts. I found a shame that Rossetti turned out to be only a season-long obstacle in Nucky’s path as it did feel as though he could have really fucked some shit up, despite this his final scene is one of the shows best moments yet.

With Rossetti leading the way all the consistent characters head even further in psychopathic madness. Nucky, yet again portrayed marvellously by Steve Buscemi, continues on his journey of becoming more and more ruthless and cold. Nelson Van Alden (Michael Shannon) also reaches new levels of insanity, which is hard to believe considering how much of nut job he already was. And Gillian Darmody (Gretchen Mol) commits some horrific acts while facing the grief of her son’s death. It really speaks to the shows quality that these characters can all spiral out of control but everything in the story remains so tight, it was obviously planned from the beginning that this is the kind of direction they would all go in, you’d be hard done by to find a single character that hasn’t got at least one screw loose.

The ending of season three couldn’t have been different from that of it’s predecessor, though. Rather than leaving us on a massive cliffhanger things here seemed rather well tied-up, they clearly must have some ideas of how things are going to get out of hand again in season four. But overall, season three ups the ante to a whole new level bringing a lot more craziness than the two before it, if the show keeps going in this direction by the time it reaches its end things are literally going to get insane.