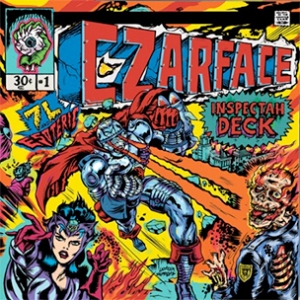 Wu-Tang Clan’s Inspectah Deck joins forces with underground rappers 7L and Esoteric to create Czarface, probably the most refreshing hip-hop record in years. I stumbled across the album on iTunes and was taken aback by how special it actually was. They combine old school hip hop techniques with more recent styles and the result is a breath of fresh air for the whole of hip hop music, in my opinion.

The record is not littered with samples like a large amount of popular hip hop nowadays, it instead takes the somewhat old fashioned approach of bringing the actual rapping to the fore, the beats being laid underneath in such a way that no limelight is taken off the lyrics. The album has a running theme of superheroes with the likes of Batman, Iron Man, etc. popping up at various points and the trio have created this character the ‘Czarface’ based on these more well known creations, in doing this its given the guys a fresh way of delivering old school raps, where they reference the things that they love and make brash claims about being the greatest in the world. The art work, of course, ties in with this and I think it just looks fucking sick, giving the whole concept of the album a picture that we can all relate to and therefore engage with the record in a much better way. While the rapping is the stand out factor it would be wrong for me to completely discount how good the production is here too, I’m sure if these guys wanted they could’ve used the same beats more prominently and the tracks would still be excellent, making the decision to have them as a bottom layer to each song even more inspired since so much work have obviously gone into them. It is clear here that everyone involved is just out to create the music they were brought up on and bring it back the way it should be. Czarface is coming for you, let’s hope this isn’t the only thing we hear from him.

So my CAGE RAGE season begins with 1983’s Valley Girl. You may never have heard of this film, and I can’t blame you for that I hadn’t either until I decided to partake in this challenge. It tells the story of Randy (Cage) a punk falling in love with an ordinary girl from the valley, Julie (Deborah Foreman). The pair have to overcome the social stigma that surrounds them in order to make their relationship work. Entirely ground-breaking stuff of course.

Its hard for me to say much about this film because there really is very little to it. The only way I managed to get through it was by laughing at how corny it was and how much a buffoon Cage looks trying to be a cool teen who doesn’t play by the rules, unfortunately he is no James Dean. He is also no Romeo, despite his greatest attempts to emulate the Shakesperian character from the play this film so obviously rips off but nonetheless he is Nicolas Cage and is, therefore, forgiven. Who can blame for wanting to come across as a teen heart throb? As for everyone involved in the project it doesn’t seem as though it worked as quite the platform it did for Cage, its director Martha Coolidge has gone onto to direct such popular delights as Real Clothes, Rambling Rose and Lost in Yonkers all of which I’m sure are simply outstanding.

In terms of the CAGE RAGE factor there’s not much to see here, I’m afraid. Although there is one particularly funny scene in which he climbs into Julie’s bathroom while she’s having a party and hides in there while numerous people come in and out seeing to their business:

Well posting over the last two weeks has been absolutely diabolical. As you can see I’ve only managed two reviews in two weeks, as well as missing both Wednesday’s to do my weekly update but, I am here now and I’m going to change my weekly update day to Saturday’s simply because I can. The two reviews that I’ve posted for your perusal in the last fortnight are Stoker and continuing in my Smashing Pumpkins series my summary of Siamese Dream, perhaps one of my favourite albums of all time.

You may be wondering then what is this CAGE RAGE mentioned in the title and I shall explain. Despite the looming deadlines and copious amounts of essays I need to be writing me and my house mate have set ourselves the task of working our way chronologically through the greatest actor of all times filmography, Nicolas Cage, so far we’re three films and I plan to get at least two of them reviewed on here by this time next week, there’ll be a page on the blog dedicated to all things Cage, and I hope it will be something you’ll enjoy. If you’re wondering what inspired us undergoing this mammoth challenge need I say more than this:

Now before I leave you to ponder on the greatness of my Cage project there is one other thing I must show you. Julian Langer is singer-songwriter from Devon, someone I used to go to school with, and he has recently been working on an album. With album he was going for a DIY feel all recorded at his home and he has just released the first single which is available to download for free on sound cloud. As for the song itself we wrote it as he was just finishing treatment for cancer and the track is about the fear and hope he had moving forward from that. So here’s the song hope you like it and feel free to leave any feedback you might have, watch this space for a review of the album when it is released:

Director Park Chan-Wook of the vengeance trilogy brings his English-language debut in the form of Stoker. Starring Nicole Kidman, Mia Wasikowska and Matthew Goode this dark chiller follows a mother and daughter, Evelyn (Kidman) and India (Wasikowska), shortly after the death of their husband/father. The estranged brother of the deceased, Charles (Goode), invites himself to stay with the grieving pair and in doing so shakes up a number of the darker elements that lie within the pairs personalities.

Those of you that are familiar with Chan-Wook’s work will be used to the graphic violence that litter all his films, Stoker is a much more measured affair, the violence boiling under the surface and only at the odd moment does it boil over and spill onto the screen. What replaces any constant violence is superbly directed tension. All three of the main cast are pitch perfect in their performances all of whom clearly have rather large skeletons in their closets that they aren’t letting out. The tension is intensified by the stylistic framing of every shot we see. Awkward close-ups and icy stares form the tone of the whole piece, there is not a second where it doesn’t look awesome. The same goes for the use of sound. I have never noticed sound being a stand-out element in a film before but Stoker is the first, there are moments of sound the create an itch under the surface of your skin that can only be scratched by finding out whats making these characters tick.

The only thing that lets this film down, really, is the run-of-the-mill storyline, which is the main thing that will leave you doubting how awesome it actually is, but the way it has been put together so artistically that actually it doesn’t matter. 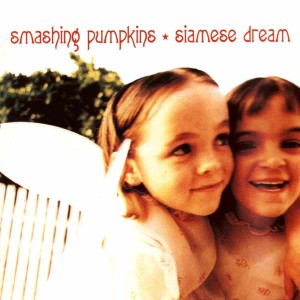 Continuing with my Pumpkins series we move on to 1993’s Siamese Dream. The album that saw them rise to be alternative rock God’s known all over the world. The album is to this day regarded as a seminal work, and one of the most influential rock albums in history. I’m going to give it a go at describing why its just so damn awesome.

From the moment the record burst into life with opening track ‘Cherub Rock’ its clear that the band have changed since Gish, not only because of better production values, but the overall feeling of grandeur is amped up so much higher. The music has a much more immersive feel. You can also notice change in how much more willing they are to be weird, they forget conventions which I feel may have been holding them back during the Gish-era and go their own completely unique way. The whole album has such unique sound, no record ever has ever sounded quite like it and that, therefore sets out as part of an elite group of albums. As well as creating the feeling of grandeur, that was later to amplified further with Mellon Collie, they still retain their ability to be utterly angst-ridden and melodramatic, with the anthemic ‘Today’ or even the reflective, melancholic ‘Disarm’. The album has a grungy sound but it is so much more than grunge, it makes grunge all the more awkward and less relatable than Nirvana or Pearl Jam.

It, simply put, is one of the greatest albums of all time and I will always love it with all my heart.